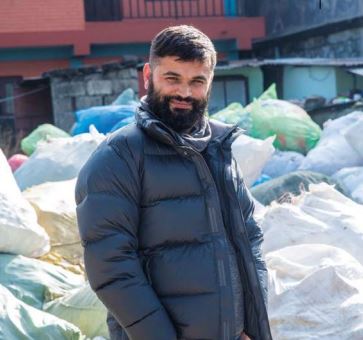 THE ENTREPRENEUR SANTOSH POUDEL is the founder and CEO of Waste Service Pvt. Ltd in Pokhara. In 2018 he was one of a select group of young innovators invited to address the Science, Technology and Innovation Forum at the United Nations in New York. ‘I got involved with waste when I was active in student politics. A group of us lobbied the city to buy more vehicles to collect rubbish that was piled up in the streets near the lakefront. They said there was nothing more they could do, so eventually we started raising money from local businesses, bought a tractor, and hired a driver to bring waste to the landfill.Two years later I got my first job, as the managing director at a waste management company. I helped to make their operations more professional, set up a regular collection schedule and expanded coverage. Gradually I decided that I wanted to be an entrepreneur in this sector. I took part in training programmes in the Netherlands, Switzerland and the United States and got more and more interested in sustainability and the problem of healthcare waste. Through a UNDP project on urban environment, I had the chance to visit CTFs in Bangladesh and India. After I sawthem I was sure that Pokhara could do this, too. It took me a year to convince the local government, but eventually they agreed. Waste is a deprived sector. When I told my mother about the job I got with the waste company, she had a negative reaction. Lots of people do. They make assumptions about people who work in waste. But things are changing. I was the first to start my own company in Pokhara, but since then five more have followed in my footsteps. They see that it’s possible to be successful. And my mother now proudly tells everyone that her son works in waste management.’

THE ENTREPRENEUR SANTOSH POUDEL is the founder and CEO of Waste Service ...